Rob Bell and the TRIUMPHANT Word of God! 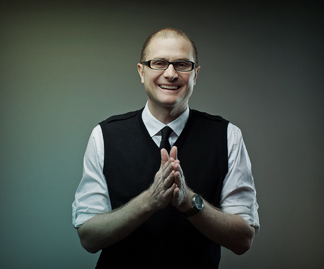 Several recent articles detail the demise of the infamous pastor of east Michigan mega church Mars Hill, Rob Bell. You might know Rob Bell from his NOOMA Bible Study video series or some of his bestselling books such as Velvet Elvis or Sex God. The legendary communicator had climbed to the top of the best-selling charts with his books and videos and was a highly sought after speaker on the conference circuit, but he now finds himself out of work, dismissed from his Mars Hill congregation, and unable to pursue his career in television as planned, spending his days surfing the waves off the coast of California.

What happened? How did this rising star of the Christian community flame out and crash back to earth?

Perhaps the most telling comment comes from Bell’s mentor, Calvary Community Church pastor emeritus Ed Dobson. When serious concerns were raised about supporting Rob Bell’s work and ministry as he struck out in his church planting endeavors, Dobson says,

“Not all of the elders felt like I did – some of them were concerned that he was inexperienced,” Dobson recalled about the start of Bell’s ministry in Grand Rapids. “But I told them, ‘Look, he can communicate. He really doesn’t know the Bible, but, if we can add the Bible to his communication skills, we’ll have a winner.’” [1]

Dobson’s assessment of Bell is deadly accurate. Bell is indeed one of the most gifted and exceptional communicators of the current day, but whereas Dobson notes Bell’s strengths, he also acknowledged Bell’s deadliest of weaknesses: he doesn’t know the Bible! While this is a devastating critique, one wonders if the real problem is that Bell doesn’t know the Bible, or that Bell simply doesn’t believe the Bible?

When one reviews the NOOMA video series or any of his best sellers, one finds a lot of good teaching, some bad teaching, and some confusing teaching, but most of all what one discovers is a hermeneutic approach that is too comfortable ripping Bible passages out of context and ever so slightly twisting them to fit Bell’s own personal bent. It is this irreverent approach to the Word of God that brought about Love Wins, Bell’s attempt to paint God as all-loving by downplaying and mitigating God’s justice by questioning the reality of hell. Without stating such in explicit terms, Bell encourages and nurtures unbelief in the living God by asking “Is Hell real?” in a manner that is uncannily identical to the serpent’s question of Eve, “Did God really say…?”

The problem for Bell, and God’s grace for Mars Hill, lay in the fact that many God-fearing men flocked to Bell’s banner in the early days, with their Bibles in their hands, helping Bell build the mega church. It was these men who persuaded Bell that he needed to either get crisper and clearer in his message or resign. But the ambiguity and uncertainty is what Bell loved and lived for, not the certainty of God’s truth, leaving him with only one option: resignation. Bell preferred to continue in a cynical, unbelieving questioning of the reality of Hell than to boldly proclaim the truth of God’s Word.

Many will look at the sad story of Rob Bell and Mars Hill Church as a cautionary tale, something to be told to young aspiring preachers attending seminary and preparing for ordination to their very own church flock. The professors’ admonition will run something like this, “Pay attention, young pastors, to the Word of God. Keep watch over your teaching and the doctrine, as Paul says to Timothy in 1 Timothy 4:16. Make sure that you keep close to the Bible or you may lose not only yourself but those who listen to you. Just look at what happened to Rob Bell!” These are very wise words, and the sad story of Rob Bell does make a good warning for many young seminarians entering their first pulpit.

But there is a greater and more profound truth to all of this: God’s Word is always TRIUMPHANT! Though his book, Love Wins, rocketed to the top of the charts, it was roundly criticised and thoroughly denounced as a thinly veiled attempt to further cloak and hide one of the most widely affirmed and solidly believed doctrines of the Bible: the doctrine of Hell. Bell, in true serpentine fashion, suggested that God was a God that loves while subtly questioning the depth and extent of God’s love, openly wondering if God would really send people to hell who wantonly hurt others and insist upon sin. Contrary to Bell’s questioning, God declares Himself to be a God of true love, insisting in His Word that justice will be done and Hell will be the place of His reckoning.

Bell’s attempt to persuade the evangelical Christian world to assume a posture of questioning God’s Word, and thereby questioning the character of God’s love and justice, has failed miserably. Before his book was even published, it was excoriated for denying the basic truth of hell through gimmickry and subtle writing dodges by many leaders within the evangelical community. But more than this, his own church could not abide his dodging and evasion of basic truth. It turns out that Bell introduced just a little too much Bible to his congregation for them to continue to stomach his ambiguities and uncertainties. Those God-fearing men came to Bell’s banner with Bibles in their hands!

Ponder that glorious truth for a moment… God’s Word will not allow itself to be the hand maiden to falsehood and unbelief! Never, never, never! Amen!

Thanks be to God who speaks in an unstoppable and unsearchable way, for because of Him speaking to us, we are able to hear Him. All glory to Him!