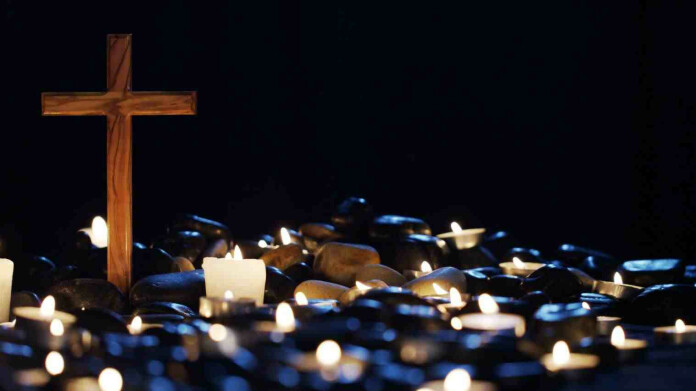 The Christmas Gift of the Cross 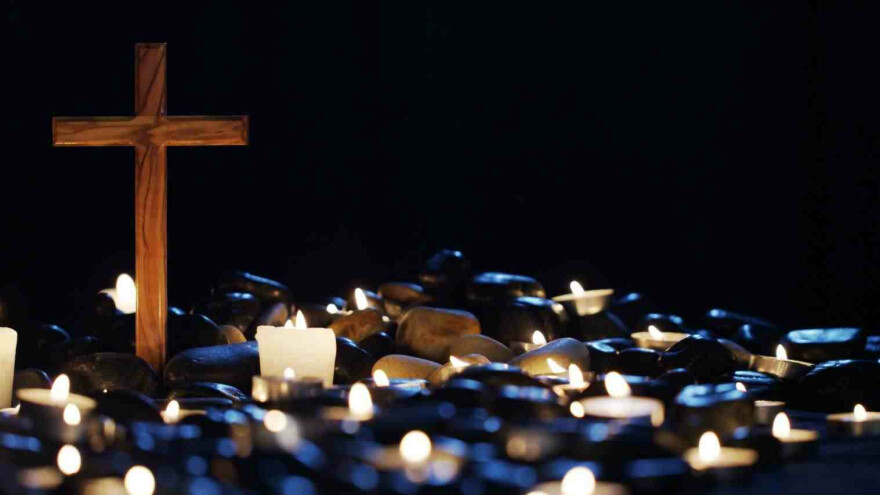 I was startled from my reverie by the blood-curdling groaning and gasping of a man in extreme agony. The sounds of "Jingle Bells" diffused across the room from overhead speakers, and a Christmas tree in the corner twinkled with choreographed flashes. Wrapped packages were littered everywhere beneath the artificial pine branches. Yet, despite the holiday feel, there's simply no dispelling the unease of a hospital waiting room. I had driven my brother to the E.R. to get stitches in his scalp (that’s another story). As I was sitting bored in the waiting room, glancing reluctantly at the unfortunate selection of reading material, harried paramedics were wheeling the gurney through sliding doors directly into trauma care.

It was a graphic site to behold: the man was strapped to the gurney, lying on his left side with a four foot steel rod pierced through the right side of his body. His right arm, twisted behind him, was also impaled on the sharpened metal. As I stared transfixed, a lady next to me whispered, “It must have been an accident.” They wheeled past quickly, and in an instant he was gone. But the horrible image lingered. How tragic that this man would spend his Christmas in this hospital, enduring the suffering of recovery and healing. Thank God, I thought to myself, for the grace of modern medicine. At least this man stood a good chance of healing.

As I reflected on the impaled man groaning in agony, I couldn’t help but think of Christ's coming at Christmas time to bring healing for all. As the tragic image of the wounded man replayed in my mind, I could not help imagining the horror of the cross in that ER waiting room. And in retrospect, it is exactly the thing that we should have in view at Christmas time. While Jesus was a worker of miracles, there were many men who could have worked miracles for God. Jesus came to work redemption. Jesus came to accomplish atonement.

Jesus came to embrace the torture of a cross...

Christmas is about giving because it is about Jesus who came solely to be our gift of redemption. While many of us will have visions dancing in our heads of mangers and trough-like cribs with shepherds and Magi peering upon the holy baby, the Father and Son understood what the incarnation truly meant: the entering of immortal God into the realm of man, the realm of agony and death brought on by sin. And so it is appropriate during this season of wonder and magic, to stop and to think for a moment on hard and painful things. It is right to pause our shopping, feasting and gift-giving in order to take a few moments thinking of the cross.

Can you imagine the blood? Can you hear the groaning and crying? Can you hear the crowd's laughter and mocking? The nails would have been heavy and large, far heavier and larger than nails that are used in construction today. There may not have been a sharpened point at the tip. Do you hear the grunting of the soldier as the hammer swung home to the loud report of the nail’s ringing?

Can you imagine the rough grain of wood and bark scraping upon his back?

Think of the sharp pain of the thorns driven into His brow. With Jesus they certainly didn’t gently place the razor-barbed thorns upon his head. They would have lassoed that wreath of thorns around the back of his scalp and forcibly jerked them down his face. Perhaps they gave the thorns a quick clockwise yank rotating them deeper into His scalp to better secure them so they wouldn’t fall off during the day.

Carbon dioxide would trap in His lungs by the nature of the position in which He was suspended. This would result in a pounding, migraine headache -if He didn’t have them already from the lack of sleep, the thorns driven into His skull, the loss of blood from the beatings, and the beard-pulling that took place through the long night. As the intensity of the migraine grew, He would have been very sensitive to light and sound. Ultimately, He would be choking to death. In his human nature, he would have been compelled to do something! He must somehow alleviate his choking. Heaving with all His might, He would try to pull Himself up while supporting His weight on the hook of nails driven into His hands and feet… just so He could exhale and take a fresh breath of air. The nails would pull on his nerves, sending sharp, stabbing pains up his arms and legs, causing the muscles in His neck to tense with exploding sensations throughout his skull.

The tension in His neck would cause Him to stiffen. It would have been painful, maybe even impossible, to swing His head around from side to side as the crows cawed at him, circling overhead… It really didn’t matter what He did. He could hang helplessly and allow poison to build in His lungs, resulting in the choking and throbbing body aches. Or He could pull up and exhale, an action resulting in shooting pains in his arms and legs with exploding migraine pain in his head. What lovely options He had to choose.

He chose the thorns.

He chose the beatings.

He chose the cross.

He chose to be executed.

He paid the price to set us free. God’s gift to you under the Christmas tree is an execution on your behalf.

This is the meaning of Christmas. God, the immortal and all powerful, entered into humanity as a baby child, lived as a man, and all this for the sole purpose of taking the cross off our backs, taking the cross upon His own back. God came for you, so he could die for you. He chose the nails, so that He could call you to salvation.

In the wonder of this holiday season, you sense something of the immortal and that sensation is not mere sentimentality, because it is true. You were meant to live forever. The Bible says that God has placed this longing for eternity into your heart (Ecclesiastes 3:11). Yet we all know that death comes for us, sooner or later. The actual cause of death is the least investigated crime in the history of the world. And do you know why it is so little investigated and so broadly ignored? It is because the murderer who perpetrated this crime upon humanity is you. It is also me. It is all of us. But Christmas is the answer.

You see, my friend, without Christ you will not live to see the full immortal life for which you were destined. Without Christ, you will perish and experience destruction in hell for all eternity. But with Christ you can see the fullness of eternal life! The Bible tells us that because of our sin we must experience death (Romans 6:23). This is exactly why Christ came. He came to offer himself on our behalf as the satisfaction of God's justice and as the object upon which God could fully vent his rage for the crime of sin (Romans 3:23-25).

Yet salvation is offered as a free gift if you choose to receive Him, this Savior who is fully God and fully man who was born to redeem us all. But of course, to have Christ you must receive Him the same way you would accept any other gift at Christmas time. "How do I receive Him?" you may be asking. There is no way to completely and easily answer this within a blog post, but there is also no need for me to try. If there has awakened a desire in your heart for Christ, then simply come and worship Him! Follow the call and beckoning of Jesus as He is speaking to your heart, and join together with the church to worship Christ. As you worship Him, confess to the pastor or one of the other leaders at the church of your interest in being a follower of Jesus. Tell them you're ready to take the next steps. There, in the fellowship and company of the church, you will find the answers to your questions. There you will be guided to take the next step of faith in your journey.

You can join us at First Baptist Church on Christmas Eve, December 24th at 6:00 PM. We can worship Christ together!

This made me cry - beautiful, important reminder. The gift of Jesus at Christmas is meaningless without the death and resurrection of Jesus at Easter. My cup runneth over to think of this.