The Present Rise of Heresy 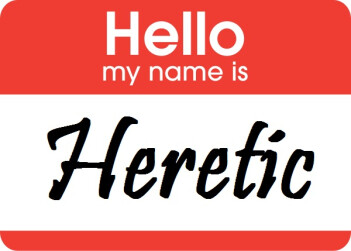 I was recently asked a question by a concerned church member. The question was this: "Why does there seem to be, among evangelical Christians, such a sharp and sudden rise in the difference of opinion on what used to be commonly accepted doctrines of the Christian faith?"

Great question! Why does there appear to be so much disagreement, with a particular interest in the actual why? What motivates the disagreement? What is the driving reason for disagreeing?

First, there doesn't simply appear to be disagreement. There is, in point of fact, substantial disagreement over the interpretation of various doctrines of the Christian faith. For example, there is a growing embarrassment among evangelicals over the age-old labels that they used to proudly embrace of inerrantists and infallibilists. There is a swelling tide of opposition to the idea that Adam and Eve were literal historical individuals, supernaturally and instantaneously created by God. There is also the creeping confusion over gender and sexuality working its way into many evangelical churches, obscuring our understanding of gender roles and the way that men and women should relate to each other. So...what's the deal?

I think if you were to ask any number of individuals who propose alternative interpretations to Scripture that conflict with the historical positions of orthodoxy, you would get any number of different reasons. And some of those reasons may even employ charity and love for our fellow man. Some of those motivations may include a desire to see a bigger tent for evangelicalism, a desire to smooth out some of the rough edges of Christian dogma, or even a desire to simply include into the Christian faith someone that they personally love who, heretofore, has been excluded.

But, whatever motivation these individuals might put forward for themselves, they have one common denominator. And it is sinister. I offer forth the words of the early church father Tertullian:

"My first principle is this. Christ laid down one definite system of truth which the world must believe without qualification, and which we must seek precisely in order to believe it when we find it. Now you cannot search indefinitely for a single definite truth. You must seek until you find, and when you find, you must believe. Then you have simply to keep what you have come to believe, since you also believe that there is nothing else to believe, and therefore nothing else to seek., once you have found and believed what Christ taught who bids you seek nothing beyond what He taught." Tertullian, Prespcription Against Heretics

This is the issue. If we seek Christ, then once we have found Him and His teaching, we must submit to Him as Lord without qualification. To go on seeking for some way to soften edges or to smooth out prods and pokes which may ruffle feathers is to fail to submit to the Lordship of Jesus Christ who, as Lord, calls us to embrace that which has been delivered for all time.

The Word, Himself, speaks to us about these things:

"Beloved, although I was eager to write to you about our common salvation, I found it necessary to write appealing to you to contend for the faith that was once for all delivered to the saints." Jude 3.

"But you must remember, beloved, the predictions of the apostles of our Lord Jesus Christ. They said to you, 'In the last time there will be scoffers, following their own ungodly passions.'" Jude 17-18.

Orthodoxy doesn't really ever change. These sudden "debates" about inerrancy and infallibility, on gender roles, the historicity of Adam and Eve and any number of other questions, are not really debates as far as the early church fathers are concerned. They are heresies.