“Living Right on the Job”

Passage: 1 Peter 2:18 “Servants, be submissive to your masters with all fear, not only to the good and gentle, but also to the harsh. 19  For this is commendable, if because of conscience toward God one endures grief, suffering wrongfully. 20  For what credit is it if, when you are beaten for your faults, you take it patiently? But when you do good and suffer, if you take it patiently, this is commendable before God. 21  For to this you were called, because Christ also suffered for us, leaving us an example, that you should follow His steps: 22  "Who committed no sin, Nor was deceit found in His mouth"; 23  who, when He was reviled, did not revile in return; when He suffered, He did not threaten, but committed Himself to Him who judges righteously; 24  who Himself bore our sins in His own body on the tree, that we, having died to sins, might live for righteousness——by whose stripes you were healed. 25  For you were like sheep going astray, but have now returned to the Shepherd and Overseer of your souls.”

As we have seen in past messages from First Peter, the apostle Peter had a surprising grasp of “the big picture”. He understood the relation of Old Testament Israel, and the gospel of the Lord Jesus Christ which had now come to Gentiles as well as to the Jewish race. He understood that Jesus Christ was the true cornerstone of the living temple of God, and he understood that believing Jews and Gentiles alike formed that spiritual dwelling place of God. What remarkable privileges belong to those who belong to Christ. To believers, whether Jew or Gentile, he said in 1 Peter 2:9 “ you are a chosen generation, a royal priesthood, a holy nation, His own special people, that you may proclaim the praises of Him who called you out of darkness into His marvellous light; 10  who once were not a people but are now the people of God, who had not obtained mercy but now have obtained mercy.”

At the same time, Peter was intensely practical.  When we placed our trust in Jesus, we became citizens of the kingdom of God, with glorious privileges. But we still have to live on earth, and function as a worthwhile part of our culture and our society.

In each of these,  the key word in each of these sections is “submit”.  How opposite the word submit is to our natural tendencies. In our self-centred culture, the word “submit” is almost a dirty word. Listen to the newscasts of labour relations and the dominant idea is about “securing our rights”.

And because you know who you are as a child of God, you don’t have to demand your rights. You can voluntarily submit to authority whether in thenation or on the job or in the home. For that is what the word submit refers to: It is a word which speaks of a voluntary placing oneself under the authority of another.

Already he has addressed our role as citizens under the authority of our various levels of government. Now he moves on to our place as workers.

As part of living here in Canada, we have to work for a living. Now for many of you, you may say, “Not me, Pastor! I’ve done my stint, and I’m glad to be retired. I’m perfectly happy to sit at home and draw my pension. So you’re not talking to me today.” Well for you, you’ll have to just think back to your working days, or think of your kids and tour grandkids.

Some of you are wives. Perhaps you have worked for an employer throughout your lives. Some of you have had the opportunity to stay home and care for your home and family - a wonderful privilege - except  the pay wasn’t so hot!

Someone else is an employer, so it might seem this doesn’t apply to you.

But First Baptist now includes many families who are in the work force. That is why I entitled the message ‘Living Right on the Job’ and added the postscript “A message for our younger adults who work in less than ideal conditions” in hope that some of our younger couples might attend.

Of course we could say that the passage does not apply to any of us because Peter was talking about being household servants or as the King James Bible says, “Slaves”. That tells us something of the culture in which Peter was writing. It was a culture of slavery. But it was a culture in which Christianity had brought so many slaves to Christ, that Peter spoke to them rather than to the ruling class. That was effective evangelism!

Though this culture was so different from ours we may draw principles of behaviour to guide us in our daily life as workers.

What are these principles of behaviour?

To put this in our context, substitute the words “Workers” and “bosses”. Now admittedly you will never find this guideline in your union manual. And I remind you that this is written to Christian workers, not to non-Christians.

And yet, is this not what the workplace demands of us? Does it not demand that workers submit to their bosses and carry out the will of those who are over them? And is it not true that there are good, and kind bosses, and there are unkind, and harsh bosses? Then mix in labour unions and this scriptural advice is not different from what the world demands. What is different is the attitude with which a Christian worker receives this instruction.

Now this is key to the whole passage, for you will never be a truly good Christian worker if you are only doing it for the sake of a paycheck or out of a desire to be “nice” or to be “loyal” or some other motivation. Not all bosses are nice. Not all requirements of you will be “fair”. 19  For this is commendable, if because of conscience toward God one endures grief, suffering wrongfully. 20  For what credit is it if, when you are beaten for your faults, you take it patiently? But when you do good and suffer, if you take it patiently, this is commendable before God.

Now remember, this was written to slaves, not to free men or women. Today we have laws to protect workers from abuse whether physical, or sexual, and from other forms of harassment.

But the point is, if you are a poor worker or are not doing your job, don’t complain about your boss’s treatment of you. Before God you need to shape up and fly right.

But if you are doing the best that you can to fulfill your responsibilities, and you are still mistreated, then remember whom you are serving. You are not serving a boss; you are serving God. And if at some point you have to take a stand for what is right and it leads to abusive reaction, remember that you are serving this man or this woman or this company as an expression of your obedience to God.

“when you do good and suffer, if you take it patiently, this is commendable before God.”

You will notice that Peter talks a lot about suffering in this letter. He assumes that life is not easy and that it involves a degree of suffering whether physical or emotional or mental, and he reminds us that when we suffer we are following in the steps of our Master. Listen to what he says about Jesus’ response to suffering.

Yes that is right, you and I are to follow Christ’s pattern of action. The word example is the word for under writing: and refers to the teacher writing out words in a beautiful handwriting, and then the child placing that sheet under his own and tracing or copying those letters over and over until the child’s writing resembles that of the teacher.

So in living, and in the midst of any suffering, we are to live out before today’s generation according to  the living pattern of Jesus.

He willingly laid down His life for us.

Jesus was personally sinless. He was not abused because of wrongdoing, but because of right doing, and we must also remember that when we live properly as God would have us to live, when we live right on the job, we shall not necessarily receive brownie points for our efforts. In fact, our efforts to be a godly worker, may draw out misunderstanding from our boss and from our fellow employees.

How do you react when you do right and are wronged?  In fact, Richard DeHaan of Radio Bible Class and Our Daily Bread, entitled this chapter “It’s your right to be wronged.”

He offered no retaliation. In fact, with a quiet dignity, He answered Herod nothing, he gave no answer back to the Jewish leaders, and He answered Pilate’s questions with such an inherent authority that Pilate could find no fault in Him, realized that it was envy which caused the Jes to deliver Him up, and wrote over His head, “This is the King of the Jews”.

No, He did what we must learn to do. He committed Himself to the One who judges righteously. In every thing that you experience, remember that God is aware of it all and that it to Him that we must give account.

Let’s think of Jesus example in suffering once more:

I wish that I could say that I have always been a good example of how to live right on the job, but I would not be telling the whole truth. Now, of all people, pastors work under ideal conditions, don’t they? Yes and no! I have always said that I have been doing what I would like to do as a hobby and getting paid for it beside. I look upon myself as extremely fortunate, which makes my admission that much more painful.

In one of our churches, after many years of joyful ministry, a man began to question my doctrinal position in regard to prophecy. I became defensive. That led to more people taking sides. I acknowledge that I did not act with the Christian grace of which I have been preaching and it brought harm to the church. Looking back, I can see that if I had responded as exemplified by Jesus, I would have spared the church and my wife and myself unnecessary pain.

Is it important for a Christian to live right on the job? Absolutely, but I have to tell you also that it can be costly.

There is an illustration of missionary couple returning home from 40 years of service in Africa . On the same ship Theodore Rossevelt was returning home from a big game hunt in Africa. As the ship pulled up to the dock in the New York harbor, reporters and well wishers were  there to greet Roosevelt with banners and cheers.  - No one was there ne to greet them. The missionaries were tempted to feel lonely and unappreciated.

And then they remembered, “But Lord, we are not home yet.” 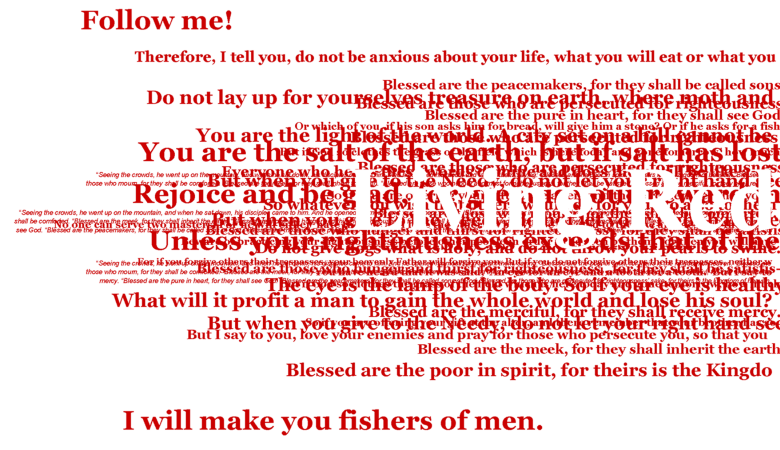 Living as Christian Husbands and Wives.

Our Relationship with our Fellow Christians.

Living according to God’s will to the end.

Dear friends, do not be surprised at the fiery ordeal that has come on...

We are like living stones, being used to built up the Lords spiritual...

A look at the ministry, motives and rewards of the Pastor.

Submission: the state of being obedient. The act of accepting the...

When we placed our trust in Jesus, we became citizens of the kingdom of...