The Christian should never retaliate to injustices inflicted upon Him, but should always leave vengeance in the hands of God. But how does one realistically do this? Jesus teaches that the waters of a believer's soul should run deep with other concerns besides personal justice.

Where is this phrase "Eye for Eye" found?

“Eye for Eye” is mentioned in three different places within the Old Testament.

I want to draw your attention to something. All of these passages teach the need for justice, but they all place the determination and execution of justice within the framework of the community. Always.

What’s wrong with this? The simple truth is that it always goes too far. Can I share with you one observation that I’ve made over the years? I’ve never seen nor heard of a man being murdered by another man… that he had murdered first. Have you?

So what is at the heart of vengeance? What’s wrong with this?

Ezekiel 25:15 – “Malice of soul.” We have hearts that are totally consumed with ourselves; they have become very small and very anemic thinking of nothing but self with no room for God and no room for faith, no room for trust, and no room for dependence upon our Father.

Illustration: Just like the fake river and waterfall, people often have no depth to their soul. They are often very shallow. And when a river runs shallow, it crashes over every rock and protrusion along the stream bed, casting up the foam and whitewater of the river’s furious running.

WHAT DOES THIS MEAN FOR US AS INDIVIDUALS?

“Do not resist the one who is evil…”

“Tunic,” – the shirt, the basic item of clothing worn. Cloak was the coat that you needed to keep warm at night.

As Christians we must refuse to react and retaliate, preferring to absorb the blow of hatred, bearing the impact of violence and arresting the spiral of violence from continuing.

As the people of God who say that we have faith in Him, who say that we trust in Him, our waters must run deep enough not cast up the foam of every injury and injustice that others might inflict upon us.

Spurgeon: “As Christians we must be the anvil upon which the wicked men of this world swing their hammers of violence and vengeance.”

Is Jesus saying that we should refuse to retaliate, refuse to concern ourselves with justice and allow evil to be confronted by nothing more than our passive non-response? There are many who suggest this, but Jesus doesn’t teach this type of irresponsibility.

WHAT DOES THIS MEAN FOR US WITHIN OUR COMMUNITY?

See yourself as being responsible for the welfare of everyone within the community.

Job is a classic example of someone who looked after his community.

1 Peter 2:20-23. Jesus did not retaliate but trusted in God. Yet his life was also given for the blessing and salvation of the many.

Now, it doesn't matter, now. It really doesn't matter what happens now. I left Atlanta this morning, and as we got started on the plane, there were six of us. The pilot said over the public address system, "We are sorry for the delay, but we have Dr. Martin Luther King on the plane. And to be sure that all of the bags were checked, and to be sure that nothing would be wrong with on the plane, we had to check out everything carefully. And we've had the plane protected and guarded all night."

And then I got into Memphis. And some began to say the threats, or talk about the threats that were out. What would happen to me from some of our sick white brothers?

Well, I don't know what will happen now. We've got some difficult days ahead. But it really doesn't matter with me now, because I've been to the mountaintop.

And I don't mind.

Like anybody, I would like to live a long life. Longevity has its place. But I'm not concerned about that now. I just want to do God's will. And He's allowed me to go up to the mountain. And I've looked over. And I've seen the Promised Land. I may not get there with you. But I want you to know tonight, that we, as a people, will get to the promised land! 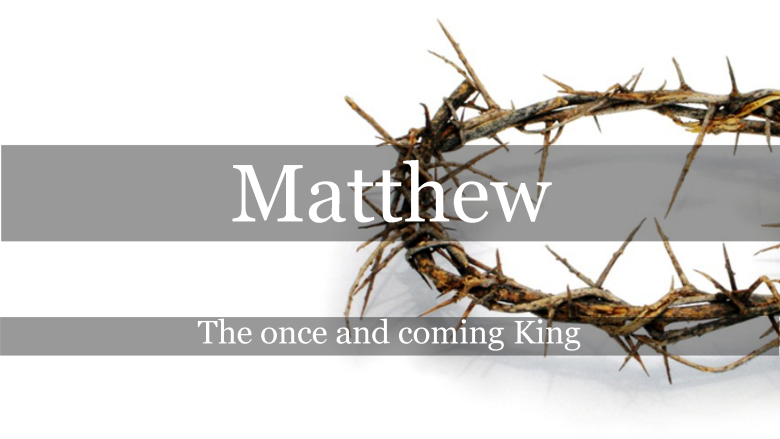 The Gospel of Matthew is a story about a once and coming King. Jesus of Nazareth is the Son of David, the long awaited for Messiah. He has come once, and Matthew tells the story of His arrival, ministry, sacrificial atoning work on the cross, and His promise to return soon.

Did you know that many orthodox Jews are still waiting and searching...

Do you believe in the virgin birth? A lot of people like Jesus. They...

I'm sure there are many among us, not just unbelievers but maybe even a...

Whenever you plant a fruit tree, it is only natural to expect that... 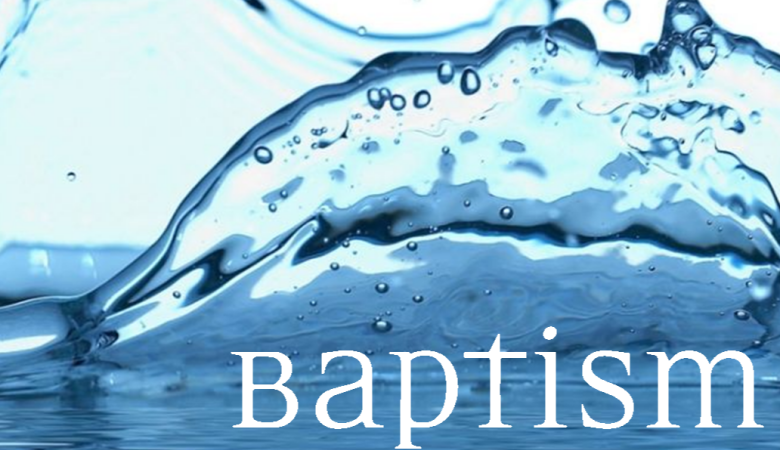 We've seen the Baptism of John the Baptist in Matthew 3, but what about...

ohn the Baptist, the greatest of all ordinary men born on this earth... 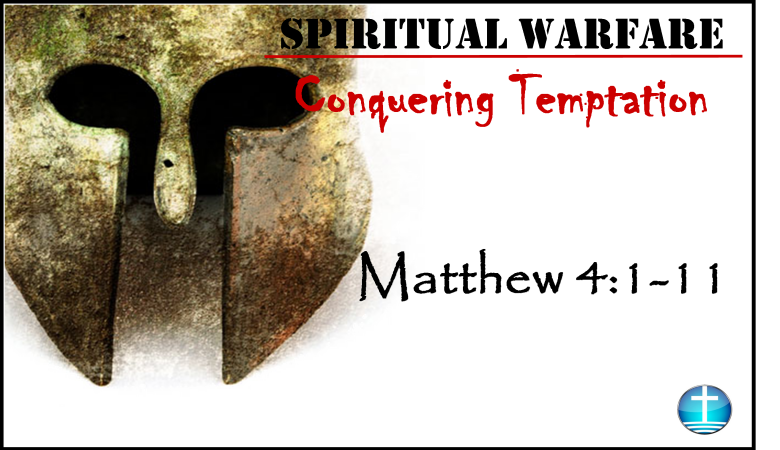 This past weekend we learned that acclaimed vocalist and singer Whitney...

Satan attempts to draw us away from God by tempting us to flippantly...

We all have those things which we treasure, and love. We love to see... 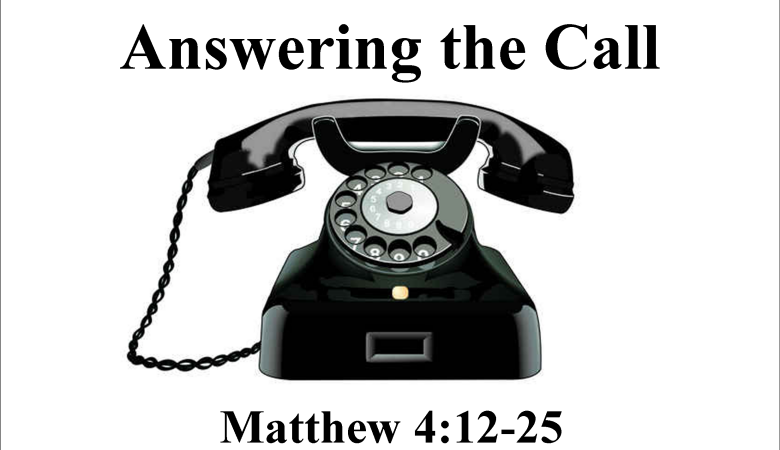 Sometimes it's time to move on. There are times when you've worn out...

Do you feel like your life is truly counting for something? Are you...

A show will draw a crowd, and the larger and more spectacular the show...

What brings Happiness? What will bring us true lasting joy and...

We all want to be happy. Whatever else we may want out of life, the...

There is a logical order to Christ's teaching. He starts with the... 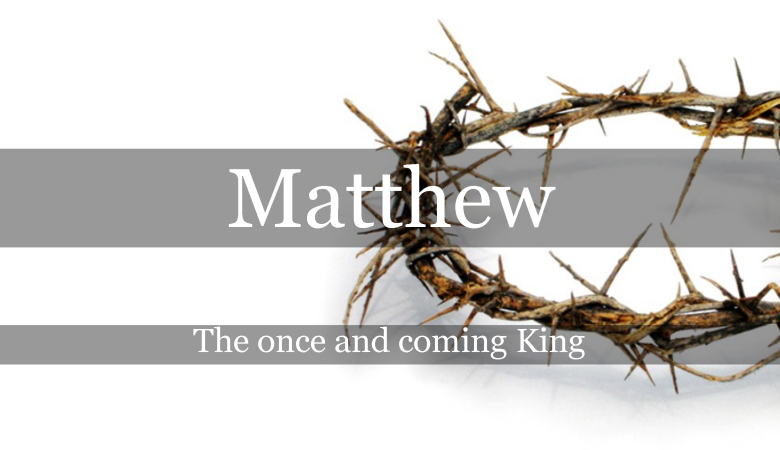 Christ promises us that if we are hungry for righteousness, if we long...

Matthew 5:8 UNITE US: Striving for Purity of Heart 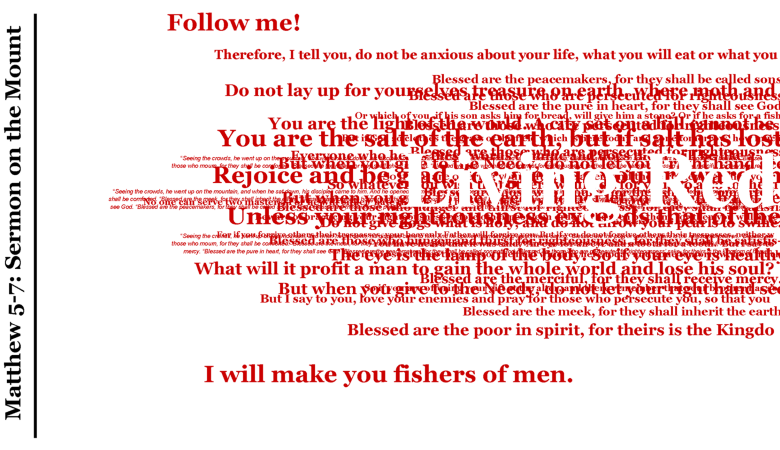 Real Peacemakers are those who do not settle for temporary truces, but...

Choosing suffering and persecution is the climax of being like Jesus...

Matthew 5:11-12, Blessed and Happy are the Persecuted

Bible Studies and Sunday Worship will not deepen your faith in Christ...

Christ commands reconciliation. Most appreciate that murderers should...

The Christian should never retaliate to injustices inflicted upon Him...

Being able to understand God's Word requires a correct understanding of...

How does loving your enemies look, practically? Christ teaches that we...

To be a hypocrite is to perform a show. We must fight against...

When we come to church, we approach it with the attitude, “Well, do I...

Matthew 6:5-6, Praying in the Secret Place

We are beginning what will be a lengthy period of time in this passage...

When you talk to friends you don't talk to them in a baby-voice, do...

Matthew 6:9a, Our Father

When we talk to God in prayer, we must remember that He is a Father...

Matthew 6:9b, Hallowed be Your Name

In this sermon Pastor Joshua Claycamp shows that praying for God's help...

Trusting God requires depending upon Him, in prayer, for everything in...

Forgiving is the flip side to being forgiven. To forgive is the radical...

When it comes to temptations, God calls you to run! If you do not...

In this sermon Pastor Joshua Claycamp draws out the dire spiritual...

In this message Pastor Joshua Claycamp demonstrates the spiritual...

Jesus doesn't desire that you be heartless about your pursuits. He...

It is only by gazing at the Father that we possess the light necessary...

Matthew 7:7-12, Seeing Yourself in the Father's Hands

Matthew 9:1-8, "Which Is Easier: Healing Or Forgiveness?"

Christian fasting transcends the Old Covenant Fasting with the arrival...

While Christians may experience fatigue and weariness, those who truly...

Slander is one of many forms of persecution which Christians should...

Christians who follow faithfully after Christ are deserving of a...

If you want to earn the Crown of Glory, then you also will seek to...

Lord, Liar or Lunatic - C.S. Lewis We don't live in a morally neutral...