When the Light of the World Flickered Out 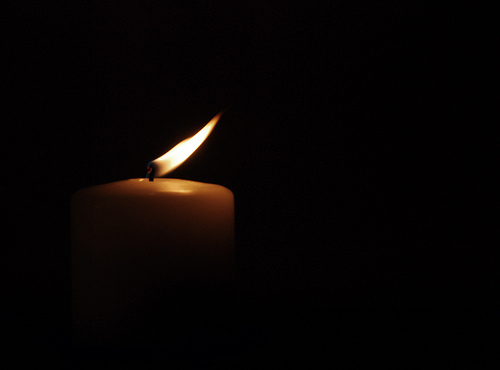 I love the following excerpt from a sermon preached by W.A. Criswell in Dallas, Texas in 1960. I posted this at this time last year, and find it appropriate to do so again this year. Some prose never grows old and never gets tired.

From the sermon, The Crown and the Cross:

He was raised between the heaven and the earth, as though both rejected Him, despised by men and refused by God.

And as though abuse were not vile enough, they covered Him with spittle.

And as though spittle were not contemptuous enough, they plucked out His beard.

And as though plucking out his beard was not brutal enough, they drove in great nails.

And as though the nails did not pierce deeply enough, He was crowned with thorns.

And as though the thorns were not agonizing enough, He was pierced through with a Roman spear.

It was earth’s saddest hour, and it was humanity’s deepest, darkest day.

At three o’clock in the afternoon it was all over.  The Lord of life bowed His head and the light of the world flickered out.

Tread softly around the cross, for Jesus is dead.  Repeat the refrain in hushed and softened tones: the Lord of life is dead.

The lips that spoke forth Lazarus from the grave are now stilled in the silence of death, and the head that was anointed by Mary of Bethany is bowed with its crown of thorns.

The eyes that wept over Jerusalem are glazed in death, and the hands that blessed little children are nailed to a tree.

And the feet that walked on the waters of blue Galilee are fastened to a cross, and the heart that went out in compassionate love and sympathy for the poor and the lost of the world is now broken; He is dead.

The infuriated mob that cried for His crucifixion gradually disperses; He is dead.

And the passersby who stop just to see Him go on their way; He is dead.

The Pharisees, rubbing their hands in self-congratulation, go back to the city; He is dead.

And the Sadducees, breathing sighs of relief, return to their coffers in the temple; He is dead.

The centurion assigned the task of executing Him, makes his official report to the Roman procurator, “He is dead.”

And the four, the quaternion of soldiers sent to dispatch the victims, seeing the Man on the center cross was certainly dead, brake not His bones, but pierced Him through with a spear; He is dead.

And Joseph of Arimathea and Nicodemus of the Sanhedrin go personally to Pontius Pilate and beg of the Roman governor His body, because He is dead.

Mary His mother and the women with her are bowed in sobs and in tears; He is dead.

And the eleven apostles, like frightened sheep, crawl into eleven shadows to hide from the pointing finger of Jerusalem and they cry, “He is dead!”

Wherever His disciples met, in an upper room, or on a lonely road, or behind closed doors, or in hiding places, the same refrain is sadly heard, “He is dead. He is in a tomb, they have sealed the grave and set a guard; He is dead.”

It would be almost impossible for us to enter into the depths of despair that gripped their hearts.

Simon Peter, the rock, is a rock no longer.

And James and John, the sons of Boanerges, are sons of thunder no longer.

And Simon the Zealot is a zealot no longer.

He is dead, and the hope of the world has perished with Him.