How Should We Observe this Remembrance Day? 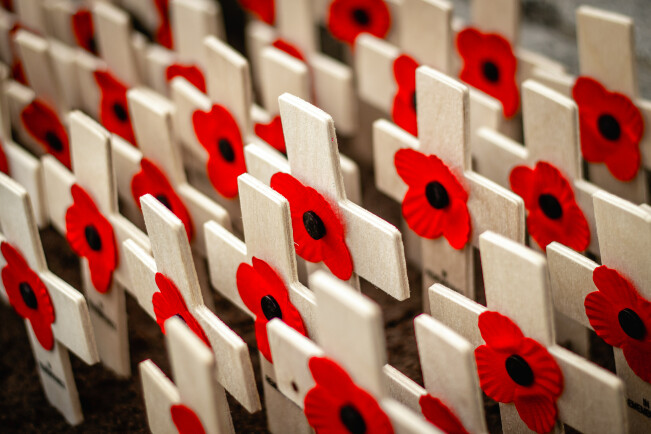 Today is Remembrance Day, a national holiday set aside for the nation of Canada to reflect on the sacrifices that have been given for the sake of freedom. But this is an increasingly difficult day for pastors and churches. How should the church participate and observe this solemn day of remembering? How should we balance gratitude for our nation with the truth that we are really citizens of another kingdom, the Heavenly Zion? Can patriotism and Christianity coexist in Canada? And this is even more distressing this year as many congregations continue to languish under the government’s encroachment into worship services with burdensome Covid-19 restrictions.

Thankfully, we are not the first generation of believers to face this question. Pastor and theologian Dietrich Bonhoeffer was increasingly concerned about the direction his beloved Germany was headed in 1932. During these tumultuous times for Germany, Bonhoeffer was asked to preach on National Memorial Day in Berlin, on February 21, 1932. Hitler’s party was on the rise, and Bonhoeffer felt the need to equip the church for suffering in the days ahead. But what should he say? How should he say it? What should a preacher communicate on a day that memorialized the Germans who died in the first world war, while simultaneously witnessing the rise of a new, more sinister government? What words would be appropriate, or more importantly, Christian, in a time such as this?

Bonhoeffer chose Matthew 24:6-14 as his text, and he began his sermon by laying out ways that the German Memorial Day would be observed.

First, bereaved families would observe the day by focusing on those who had died, who were torn from their midst by the war. These families would mourn out of love.

Secondly, the state would hold ceremonies commemorating the great German sacrifices made by the young who fought for their country. The state would mourn with a sense of pride because of the courage of young soldiers.

“The church is like the seer of ancient times who, when all are gathered to commemorate a great deed of the nation, is wholeheartedly present but suffers because he sees something that the others do not see and must speak of what he sees, although no one wants to hear it…

“The one who loves the most is the one who sees deepest, sees the greatest danger. A seer has never been popular. That is why the church will also not be popular, least of all on days like this.”

Just as Bonhoeffer did eighty-nine years ago, so we also must take time this Remembrance Day to see what others will not see, to look deeply at our society. In the same Spirit that guided Bonhoeffer's penetrating gaze at the dawn of the Third Reich, we must be willing, as he was, to see.

What do we see? We see this government encroaching into every aspect of private life and intruding heavily upon the church's worship of God. In every respect, the presiding authority demands conformity of belief and practice, to its own conclusions and standards, brooking no disagreement, however reasonable and objective. With all that has transpired in the past year, it is clear that our government, both provincial and federal, is forging its own state civil religion for the public to observe.

While Bonhoeffer acknowledged the state’s celebration of veterans and the memorializing of the dead through various monuments, he reminded his church that, while the nation’s mourning and gratitude may be good, its hope was not Christian. And this must be clearly understood by the church. So also it is for us today. We must remember that whatever good there may be in these Remembrance Day celebrations, these celebrations are not Christian. Canada mourns and expresses its gratitude this Remembrance Day of 2021, but it does so apart from the hope of Christ.

War, Pestilence and Famine in the Context of God’s Great Story

The German Church of 1932, Bonhoeffer said, must look deeper to see what God was doing during and after the events of World War I. German Christians needed to wrestle with the meaning of the war and the significance of Germany’s loss. In order to help his congregation do just that, Bonhoeffer took the reality of the Great War and placed it within the bigger story-line of the Bible, showing how war is a demonstration of the ultimate battle between God and the evil one.

Seen in this light, every war is the evil one’s reassertion of power in the earthly domain:

“The demons rise up. It is a rebellion against Christ. And one great power of this uprising is called war! The others are called pestilence and famine. So war, sickness, and hunger are the powers that try to take Christ’s dominion away from him… led by death. These powers scream: We are here! Here, see us and be terrified! Christ has not conquered; we conquer. Christ is dead. But we are alive…”

The personal challenge in Bonhoeffer's message rings very true for us today. We must resist the feelings of despair. Just as the rising government of Nazi Germany used the sting of humiliation and economic hardship from World War I to sound the drum beat of War, rising tyrants today will use the pandemic to serve their own sinister purposes.

The church, Bonhoeffer reminds us, should see deeply into these things under the clear light of Christ's teaching. Wars, famine and pestilence are intended by the devil to lead to a crisis of faith and a feeling of God-forsakenness. This pandemic and the government's response are used by the devil to instill fear and despair in the church.

The Cross and the Word of Christ

“Our situation would be truly desperate,” Bonhoeffer said, “if not for the Word of Christ: when all of this comes over, see that you are not alarmed.” Bonhoeffer then recalled various times in Scripture when we are commanded to “Be not afraid.” The crescendo of his sermon is the message that makes the church’s proclamation utterly different than the world’s message:

“What does being faithful mean here [in 1930's Germany] other than standing and falling with the word of Christ… knowing that, despite everything, Christ’s words are stronger than all the powers of evil?

Bonhoeffer’s point is that the Cross is the only power that can make sense of tragedies like war, pestilence, pandemics, and tyrannical government overreach. In fact, it is in the midst of such tragedies that the gospel shines forth in its clearest distinction:

“War, sickness, and hunger must come, so that the Gospel of the Kingdom of peace, of love, and of salvation can be spoken and heard all the more keenly, all the more clearly, all the more deeply… War serves peace, hate serves love, the devil serves God, the crucifixion serves life… Then the Lord of the church will lay his hand on the church, blessing and protecting it as his faithful servant.”

It is that last line which ought to move us deeply on this Remembrance Day of 2021. The Cross helps us to understand why God allows war and pandemics and tyrants. These things provide the sharp contrast necessary for the Gospel to shine forth. In this way war serves peace, hate serves love, the devil serves God, and the cross serves life. Amen and hallelujah.

Remembrance Day represents a day of celebration for a Canada that increasingly worships its own idols within its own civil religion. Our veterans served for the cause of freedom, not for the ideology of government. We should be careful to remember that truth. As we see this state civil religion emerging, we must be careful not to allow our own remembrance of veterans and heroes to be co-opted by the culture around us that will worship at this false altar. And neither should the church stay silent on this day.

According to Bonhoeffer, the church’s celebration must be special; it must go beyond patriotic but spiritually lifeless civil religion. This day must mean for us...

“…holding up the one great hope from which we all live, the preaching of the kingdom of God. It means seeing that which is past, and which we remember today, with all its terrors and all its godlessness, and yet not being afraid, but hearing the preaching of peace…"

In this Spirit, I'd like to put forth what this great hope is of which Bonhoeffer speaks. Everyone in the world owes an infinite debt to the God of Heaven above because they have sinned against Him. We have all sinned and fallen short of the glory of God, the standard to which we will be held. The wages of sin is eternal death, but forgiveness and salvation is possible through the death of Jesus Christ, whom God put forward as a satisfaction for the debt we owe for our sins. If we receive forgiveness from God through turning from our sins, and placing our faith in Christ, then we will forever be free. This Remembrance Day we need to remember that real, lasting freedom comes through Jesus and being reconciled to God. Jesus is our only hope.

So let Christ be our King, let the New Jerusalem be our country, and let the Gospel of freedom forever be our message. Let us remember the One who sacrificed all for our forgiveness. Lest we forget.

Bonhoeffer on Waiting at Advent